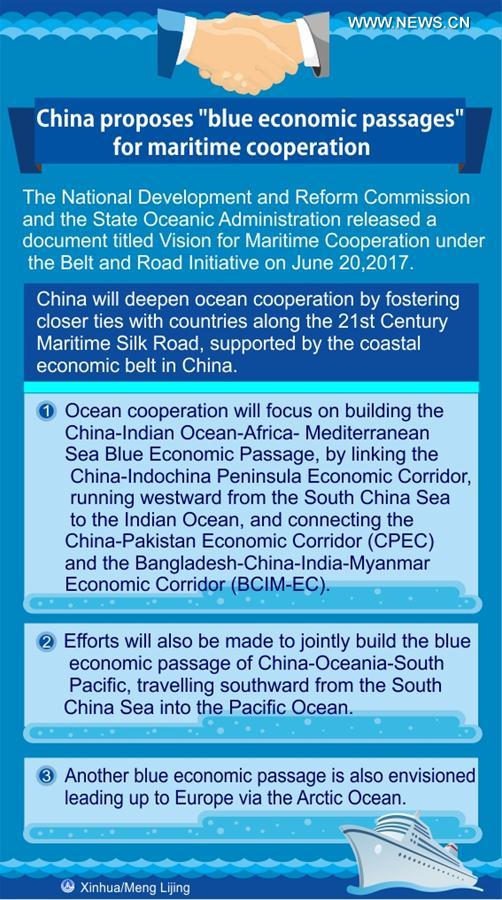 The graphic shows a document titled Vision for Maritime Cooperation under the Belt and Road Initiative, which was jointly released by the National Development and Reform Commission and the State Oceanic Administration on June 20,2017. (Xinhua/Meng Lijing)

BEIJING, June 20 (Xinhua) -- China has put forward plans for three ocean-based "blue economic passages" that will connect Asia with Africa, Oceania, Europe and beyond, in a bid to advance maritime cooperation under the Belt and Road Initiative.

The proposal was included in "Vision for Maritime Cooperation under the Belt and Road Initiative," which was released Tuesday by the National Development and Reform Commission and the State Oceanic Administration.

China is willing to engage in all-dimensional and broad-scoped maritime cooperation and build open, inclusive cooperation platforms with countries along the 21st Century Maritime Silk Road, promoting mutually beneficial "blue partnerships" and forging a "blue engine" for sustainable development, according to the document.

The China-Oceania-South Pacific passage will run southward via the South China Sea into the Pacific Ocean, while another economic passage is also envisioned linking Europe via the Arctic Ocean.

The document called on countries along the 21st Century Maritime Silk Road to focus on "sharing blue space and developing the blue economy," which will target issues such as marine environment protection, marine interconnectivity, maritime security and common oceanic governance.

China will adhere to the Silk Road Spirit of peace and cooperation, openness and inclusiveness, mutual learning and mutual benefits, shelving differences and building consensus, said the document, which was an outcome of the Belt and Road Forum for International Cooperation held in May.

The nation also promised to abide by market rules and international norms, giving play to the primary role of enterprises.

The document stressed joint development and benefits sharing among participating countries. "We will plan together, develop together and share the fruits of cooperation," it said.