China, Greece to boost cooperation through Belt and Road Ini 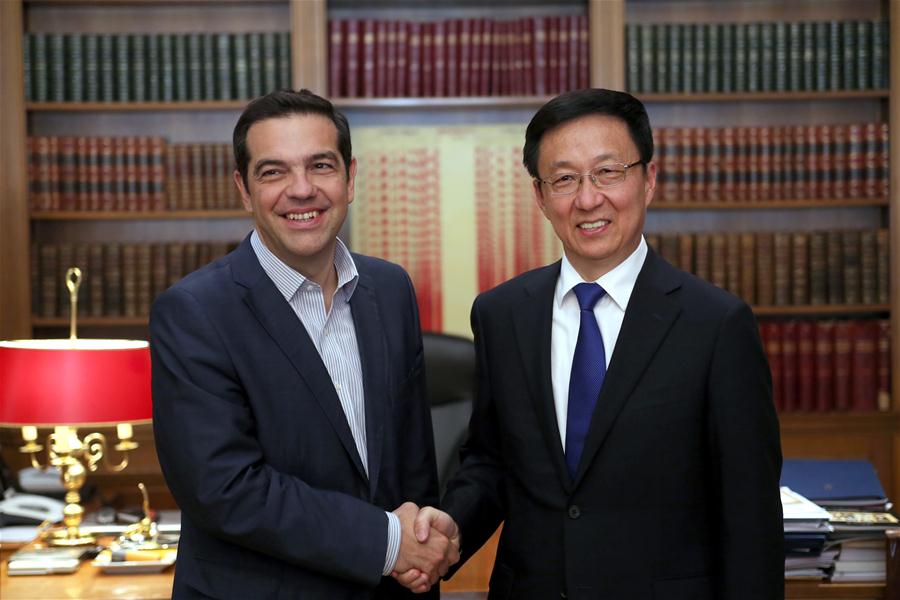 Greek Prime Minister Alexis Tsipras (L) shakes hands with Han Zheng, a member of the Political Bureau of the Central Committee of the Communist Party of China (CPC) and secretary of the CPC Shanghai Municipal Committee during their meeting in Athens, Greece on June 12, 2017. (Xinhua/Marios Lolos)

ATHENS, June 13 (Xinhua) -- China and Greece have agreed here to boost cooperation through the Belt and Road Initiative.

Han, a member of the Political Bureau of the Central Committee of the Communist Party of China (CPC) and secretary of the CPC Shanghai Municipal Committee, said this year marks the 45th anniversary for the establishment of diplomatic relations between the two countries and China is willing to work with Greece to bring the comprehensive strategic partnership to a new level.

Han said China is willing to align the two countries' development strategies and promote practical cooperation in all fields through the Belt and Road Initiative.

He said the CPC attaches great importance to the development of relations with Tsipras' Syriza party and wishes to strengthen exchanges and cooperation between the two parties, contributing to Sino-Greek ties.

Tsipras said Greece attaches great importance to its relations with China and wish to take the Belt and Road Initiative as an opportunity to further advance dialogue and cooperation with China in fields such as development and global governance.

He said Syriza party is willing to enhance communication with the CPC on ideas of party and state governance in order to yield more practical results in the two countries' cooperation in all fields.

Han led a Chinese delegation for a visit to Greece from Sunday to Tuesday at the invitation of the country's ruling Syriza party.

During the visit, Han also held talks with Greek Parliamentary Speaker Nikos Voutsis and Athens Mayor Yiorgos Kaminis, and oversaw the signing of a memorandum of understanding on friendly cooperation between Athens and Shanghai.