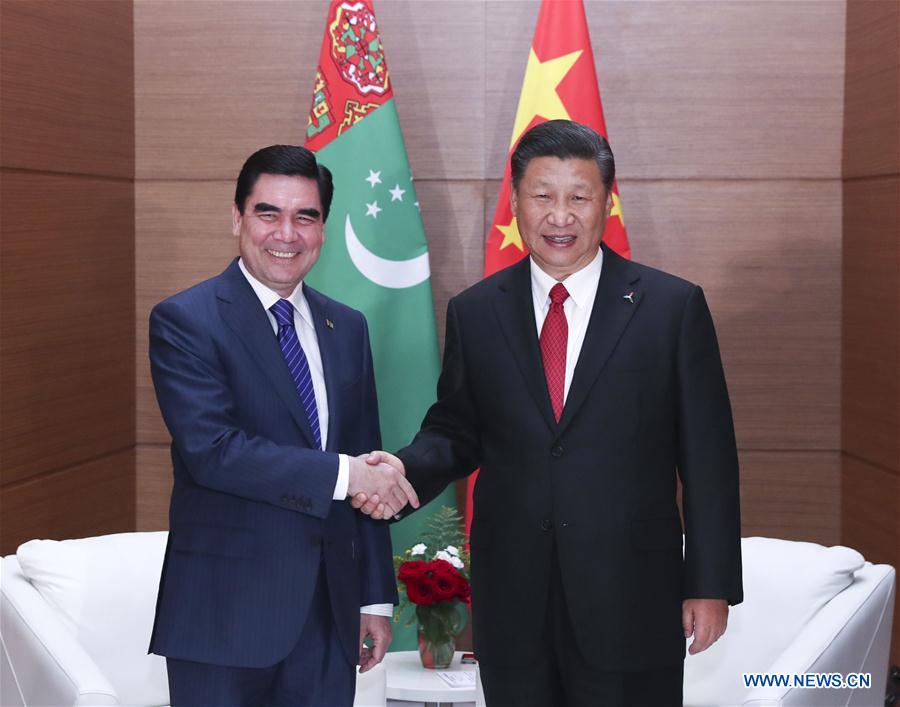 ASTANA, June 9 (Xinhua) -- Chinese President Xi Jinping said here Friday that China and Turkmenistan shall work together to promote their pragmatic cooperation under the Belt and Road Initiative.

He made the remarks while meeting with his Turkmenian counterpart Gurbanguly Berdimuhamedow.

China highly values its friendship with Turkmenistan and is ready to strengthen mutually beneficial cooperation with it, so as to consolidate the bilateral strategic partnership, Xi said.

He added that China appreciates Turkmenistan's support for and participation in the Belt and Road Initiative, and is willing to work with the Turkmenian side under the initiative so as to bring more tangible benefits to the two peoples.

For his part, Berdimuhamedow said that the past 25 years, since the establishment of diplomatic ties between Turkmenistan and China, have seen the two countries extend support for each other on issues concerning their core interests and in international affairs, and engage in fruitful economic and trade exchanges.

Turkmenistan wishes to work with China to enhance cooperation under the Belt and Road Initiative in such fields as natural gas, clean energy, production capacity and transportation infrastructure, he added.

Xi visited Turkmenistan in 2013, when the two countries established strategic partnership. Berdimuhamedow also paid visits to China respectively in 2014 and 2015, and met with Xi during the SCO's Tashkent summit last June in Uzbekistan.