As the section of the China-Laos Railway that is within Chinese territory, the Yuxi-Mohan railway will serve as a significant link for China to reach land-locked Laos.

In addition to helping promote the China-ASEAN Free Trade Area (CAFTA), the railway will also greatly benefit the local economy and the people in Southwest China's Yunnan Province.

For decades, local fruit growers have complained about the crumbling roads that have impeded them from efficiently transporting fruits to other regions in China.

once the 508.5-km-railway is finished, it will take just three hours to go by train from Kunming, capital city of Yunnan Province, to the southern tip of the province's Xishuangbanna Dai Autonomous Prefecture. The railway will take four to five hours off the current time of getting there by coach, which many tourists have to do in order to visit the lush tropical tourist attraction.

Lao president, Bounnhang Vorachith, said in April the China-Laos Railway construction will be of great significance in achieving Laos' strategic ambition of turning a land-locked country into a land-linked one, as well as in bringing the country to a new railway-driven development phase, the Xinhua News Agency reported on April 6.

After the construction of the China-Laos Railway is completed, which is expected at the end of 2021, visitors will be able to take an overnight train to Vientiane, Laos from Kunming. 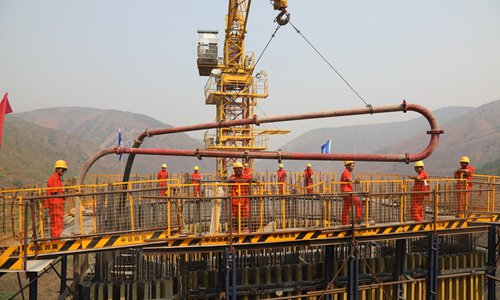 One of the highlight projects along the Yuxi-Mohan railway is the Yuanjiang Railway Bridge, due to its "sky high" pier.

Hailed as the world's highest pier used for a bridge of this kind, pier three of Yuanjiang Railway Bridge has completed 121 meters of construction as of press time. When finished, it will be 154 meters in height - equivalent to a 54-floor building, according to the bridge builder, China Tiesiju Civil Engineering Group.

The 832.2-meter bridge spans the Honghe Valley in Yuanjiang, wher a winding highway currently offers the only way in or out. Due to the poor geographical conditions, the bank slope on both sides of the bridge reaches 70 degrees, and the distance between the bridge and the surface of the river is 237 meters, Zhou Jihong, the manager of the Yuanjiang Railway Bridge project, told the Global Times.

"In order to build the 832.2-meter bridge, we had to build a 42-kilometer makeshift road on the mountains to transport construction materials, equipment and workers," Zhou said.

Located in the south of Yuanjiang Hani, Yi and Dai Autonomous county, the region sits in the middle of the Yunnan-Guizhou plateau, home to a hot rainy season and dry windy weather. 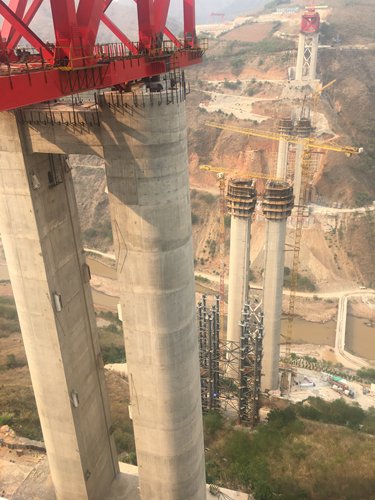 Construction of Chinese Yuanjiang Railway Bridge in Southwest China's Yunnan is to be completed in June 2020. (Global Times/Zhang Dan)

In addition to the high level of difficulty, high temperatures also pose another major challenge for the bridge construction.

"From April to October, the average local temperature in Yuanjiang reaches 40 C. Moreover, extreme weather such as strong breezes often appear in the valley," Zhou said, adding that tower crane work has to be halted when strong breezes emerge.

Due to the scorching weather, the workers, who are from different parts of China, have to start working as early as 6 am and take a long break from 11 am. At 4 pm, they will go back to the construction site and work until 8pm when it gets dark, said Wang Yukun, deputy manager of the project.

Supplies are always kept on hand in case the workers suffer from sunstroke, such as sweet mung bean soup, cooling ointments and medicines, Wang said.

Even though conditions in Yuanjiang are hard, workers seldom complain.

A 50-year-old electrician surnamed Wang joined the project in May last year. Because he has a specialized skill, his monthly salary can reach 9,000 yuan.

"I will have a sense of achievement after the bridge and the railway have been completed. I am a participant and also a witness. After I go back home, I will show off to my family that I took part in building the world's highest pier," Wang told the Global Times.

Yuanjiang is home to the Hani, Yi and Dai ethnic minority groups, while most of the workers are from other provinces in China.

"When we first came into the county to requisition land, local people provided great convenience to us. They also gave information on how to get used to the climate and which areas are suitable for living," Zhou said, adding that local people gave strong support to his construction team.

Zhou noted the bridge will be completed in June, 2020, in order to serve the Yuxi-Mohan railway in 2021. 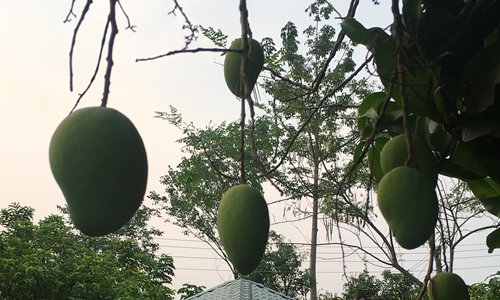 Sitting on both sides of the Yuanjiang River, Yuanjiang Hani, Yi and Dai Autonomous county is the only land route from Yunnan Province to South and Southeast Asia.

One driver told this Global Times reporter there is only one expressway from Kunming to Yuanjiang. Because of the high temperatures, incidents of vehicle combustion frequently occur along the route, which poses serious dangers and can hold up traffic.

Havin no other alternative, the land route is the only channel of transport available to deliver fruits from Yuanjiang to other cities at present. For decades, local orchard farmers at Yuanjiang Hani, Yi and Dai Autonomous county have been unhappy about the crumbling roads.

Bai Yunxia, deputy head of Manyang Group, Qiaotou Community on Honghe Street at the county, has been hoping to see the finished railway for a long time.

"We harvest green dates during the Spring Festival and it costs a lot of money to pay for a freight car ticket," Bai told the Global Times.

According to her, most of the 400 villagers in her Group make their living by growing and selling fruits. The humid weather allows a large variety of fruits to grow here, which the local people have lived off for generations.

Green dates, mango, longan, jackfruit, litchi and bananas are sent from the county to different parts of China every year, including Northwest China's Shaanxi, South China's Guangxi Zhuang Autonomous Region, East China's Anhui, Jiangxi and Shandong provinces. The annual income from one mu is between 50,000 yuan and 100,000 yuan ($7,225 to $14,450) depending on which fruit local orchard farmers grow, Bai said.

"once the railway goes into service, there will be far more businessmen and tourists visiting our county for sure," Bai noted, "and the transportation costs for fruits will decrease as well."

She told the Global Times that when transportation costs are lowered, local orchard farmers can raise the price of fruits, thus growing the local economy.

© 2020 CHINA COUNCIL FOR THE PROMOTION OF INTERNATIONAL TRADE LINYI COUNCIL